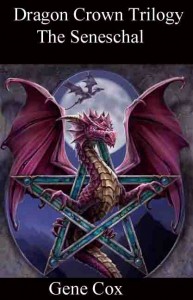 A rouge doppleganger tries to take over the world of Surnia with Dragon Crown’s Navy. With the the aid of an extensive spy network, the navy and hippogriff riding marines engage in several epic battles.

A rouge doppleganger in the ethereal plane gets an itch: “I want to take over the world!” He kidnaps Dragon Crown’s second in command, Seneschal Peopolis, and his wooden soul bound doll wife, and offers them a deal.

“I want to assume your identity for a while. Dragon Crown has the most incredible naval and marines force ever created. It includes a beautiful hippogriff carrier that can carry fire bombing squadrons and five strike squadrons of well trained hippogriff riding marines. Then there is a battleship which shoots wagon sized fire balls and natural sized lightening bolts. Dragon Crown also has a guided arrow cruiser that fires 3” bolts and is surrounded by beholders for defense.

“After defeating the main armies and navies on your world, and takeing over the throne of Dragon Crown, I will return you to the throne with half of the riches I plundered.”

“I will sell your wife as an inter-planar harlot and return you to your world with no knowledge of this.”

Due to his love for his wife, Peopolis agrees.

The new seneschal and his fleet first attack Mediogalta, the island of the famed Red Cretin Assassins. All goes well until their God, He Who Walks in Blood, Also known as Qualeepa, comes to their rescue. Try fighting an epic sized bug. It is not easy.

One Response to The Seneschal (Dragon Crown Trilogy)