If Youre Scared of Me Now Wait Till Im Dead 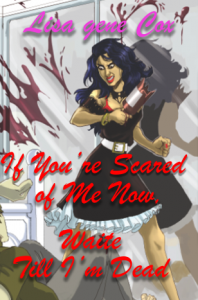 What do women do when a man in their life destroys everything that is important to them, and any chance of obtaining what they really want in life? What is the ultimate revenge?

The lives of four women are destroyed by a man in their life. They decide that nothing in life could be worse than no longer having any chance to attain what they truly want. A situation puts them in touch with each other. A psychic where they met informs them that she is in touch with the spirit world and knows how they can remain on earth as spirits after they die. The women make a suicide pact, come back as spirits, and get their revenge. The men are driven to do anything, even seek their own suicides, to rid themselves of the vengeful spirits following them. Wait till im dead

Mary Ann is caring for her terminally ill father. He is her life, and she loves him dearly. Her stingy sister is married to a powerful lawyer, and has her husband devise a will which will award her the property that her father is planning on leaving to Mary Ann. When the will is read, it is found out that Mary Ann is left with nothing. She was recently fired from her job and her un-employment will run out soon. With nowhere to live, she moves into a homeless shelter. The homeless lifestyle is totally new to Mary Ann. She is taken advantage of by dope dealers and other hustlers on the street. Her son and daughter, both of which she has never understood, will no longer talk to her. She even has a horrible relationship with her mother, her only other relative. Her current life is over, and she sees no hope in starting a new one.

Ann is a wine wholesaler for her father in Spain. She meets Hoot at an Infinity dealership. They fall for each other, get married, and build a new home together in Austin. One night Ann goes to a card reader on 6th Street and finds out that she cannot have kids, something that she already suspects. Hoot was a football star at U.T. Austin. Hoot’s father and grandfather were football stars there as well. Hoot’s life goal is to have a son who will be a star football player in their footsteps. When Hoot finds out that Ann cannot have kids, he surreptitiously hires one of Ann’s bride’s maids to be a surrogate mother. When Ann finds out, she feels that she has been totally betrayed and that the life she is planning is no longer feasible. She must somehow start a totally new life. If your scared of me now wait till im dead.

Camisha has a son and a daughter. Her life is her daughter which she enjoys jogging and using the wii with. Her husband begins an affair with a rich doctor. Her husband suggests that his wife go see this doctor for her back problems. The Chiropractor wants her husband, and paralyzes her. Now she can no longer pursue the activities which are important to her like care for her kids, take care of the home, wii, or even have sex. Camisha realizes that she has been horribly betrayed by those close to her. How could they have done this to her? Her life is over.

Dahn is a supervisor at Advanced Micro Devices in Austin. Due to her brilliance in the field she is the supervisor over those who have been there longer. A man that she supervises is jealous. He is also from India, and believes in the cast system, and that men should be supervisors over women. Dahn is from the lowest caste in India. He is from the highest. He manages to steal her password and sends out secret company documents to Intel while he was logged in as Dahn. AMD finds out, fires her, and prosecutes her with felony charges. With a felony conviction on her record, Dahn will never be able to find a job in her career again. She has no money saved and many bills to pay. Her life is over, and she has no idea what to do.

The women, through their own circumstances, find themselves at a Card Reader’s stand on 6th Street. From listening to the readings of others, they recognize the common disasters in each others lives. Card Reader has a solution for them. They have to start over somewhere and somehow, but there are options on how this could be done.

It’s show time. The men who ruined their lives and the others that were involved find out what an obsessed spirit can do.