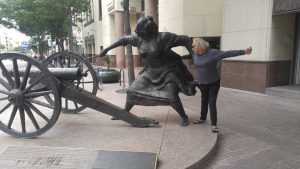 Alice of Green Glade is the telling of the search for solidarity, serenity, and being yourself. The story is told by a female mallard duck who lives at Green Glade.

Why do people have to escape to nature to relax? What went wrong with the world that they created? Can anything be done to ease the problems? Go Ask Alice.

I am her scribe. She wishes to share how she achieves and maintains a peaceful and serene life even while encountering constant survival issues (like being eaten), and seeing a few of her kids die who just were not meant to be, due to errors that occurred in the herculean task of meiosis.

Nowhere in the constitution does it say that only men (males), can vote, and yet it took a constitutional amendment for women to “earn”, the right to vote.

In 1920, the 19th amendment was ratified by the majority of the states, which is what it took. Women first voted in the Dec. 20 election in 1920. Mississippi never ratified the 19th amendment until 1984. Women in Saudi Arabia were not allowed to vote until 2015.

The meanings of many words change with time. Consider the word “MEN.” When the Declaration of Independence was written in 1776:

We hold these truths to be self evident, that all men are created equal, that they are endowed by their Creator with certain unalienable Rights, that among these are Life, Liberty and the pursuit of Happiness.

The term “men” was accepted to mean “white males”. They felt that it was obvious (self evident), that a woman was not a man. Blacks were not even considered to be human at that time. American Indians were referred to as ‘savages’ in their literature of that time period. More akin to a wolf than a human. Definitely something to be controlled or eliminated.

To them, only an idiot would not know that a “men” was a white male.

When the 15th amendment rolled around, and against tremendous opposition and distress, the term “men”, was changed to mean all males, regardless of race, creed, natural origin, or other socially unfavorable or discriminatory situations (basically non white). 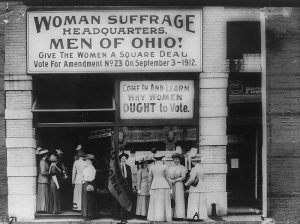 Some women finally got tired of this shit and wrote, marched, and practiced civil disobedience for 40 years until the term “men”, against tremendous opposition, came to include women in a very limited capacity, specifically in the capacity to vote. Read the news paper archives of the time. Congress MEN spewing, “We can’t let women vote! They are stupid! It will ruin the country!” Well did it?

Gay rights concerned changing the meaning of the terms “men” and “women”, “male” and “female”, and their separation. No one really cared who someone else married or lived with. The language they designed makes you choose “Is it a man or a woman. It is either he or she. Which?” Spanish and other romantic languages make you choose via verb conjugation if they walked, for example, in a men way ‘o’, or a female way ‘a’. A ruler way or subservient way.

Now in 2017, Conservatives, still pissed off about the Supreme Court decision on gay marriage, are pushing to outlaw a person using a public restroom that do not match the gender on their birth certificate. The issue is not about which restroom you use, it concerns the dreaded broadening of the term “men,” which is so zealously guarded.

There has not been a single incident reported involving transgenders misbehaving in a restroom. If one had come up, certain people would insure that it achieved a Hillary Clinton email type publicity. Women in power are not complaining about transgender women being in their restrooms. They know that they have the issue covered. Women have a psychic sense that males do not have. It is necessary to know what is wrong with their baby. If there is a problem, they will know it before they even walk in the door. Ever wonder why nearly all people who advertise themselves as psychics are women? We are. It is the White Males in power that are complaining, and it is not even their restroom.

White males, especially, have had a problem thinking that the scepter between their legs gives them the non challenge-able right to rule over all other groups and to control all their activities. The history of The White Man. The American Indians referred to the horrible phenomena as “The White Man.” Through various techniques men have produced large groups of women have either been brainwashed into actually believing this, accepting it, or at least putting up with it. Many other groups of males must put up with this as well. The Dakota Access could be an example.

Where have all the transgender people going to the restroom these many decades? With you — and you didn’t even notice? Some have created this new bogus emergency. They needed someone new to demonize and exert their dominance over. As usual, it was a weak and defenseless group that they chose.

Serious civil rights are at issue. For instance, it wasn’t that long ago that bathrooms and water fountains were segregated by race. This new discrimination cannot be allowed to stand, or sit, as the case might be.

They even boast of their efforts to return women to the health care nightmares of earlier decades by diminishing their access to quality care. Having lived in the Philippines, I have seen many coat hanger abortions. If a woman wants to have an abortion, she is going to do it. It isn’t that hard to do. It is more hard not to do. The only women that I saw that were harmed by coat hanger abortions were the ones who did it continually.

Women, some legislators seem to be saying, should shut up and do what the menfolk tell them to do. Unfortunately, some groups get seen leading the charge, often religious groups who need to stay in their churches and out of volatile social issues, since it could have a negative impact on achieving their primary purpose.

The group ‘White Males’, is not the only group that has a tendency to implement autocratic control in their sociospheres. They are not alone. They are just an easy group to study this philosophy with.

Work with me on this. A person is not their actions. That person, including what race and gender they are remains constant. The many actions that they take on a daily basis, and even continuous basis are actions predicated by innumerable factors, most of which you are not aware of. That person is not their actions. They are distinct. Actions can be judged, but not people. All religions say that judging others is not your job title. It is reserved for someone else. And definitely not races of people or genders. Failure to do so produces prejudices, bigotry, and stupid misjudgments of what is really going on. When we nail down inappropriate actions we should work on bringing that out and making it better. The action. Not the person.

There are 88 keys on a piano. They are all different. If they were the same, it would produce no music, no harmony, and no enjoyment.

If you disagree with the ruler or rulers of a county, don’t be mad at them personally. They were elected by people who felt trapped and needed a ray of hope. And that group happened to be the voting majority. There are always openings for the job of “Savior.”

In Plato’s The Republic, Plato showed that the end results of a democracy is always a dictator. This needs to be remembered.

Tolstoy could tell you Exactly what is going on here. War and Peace reveals the largest diamond of human wisdom I have had the honor of seeing. War and Peace depicts Napoleons invasion of Russia. Tolstoy paints the lives of the rich and the poor living in Russia at the time galactically. But that was not the reason he wrote the book. Even though he lived 100 years after the event, he discovered a wonderful secret about it to share with us. Napoleon didn’t invade Russia.

The people of France had fallen on hard times, which happens often to groups of people as well as other animals. They were desperate for a way out. He provided the promise of a way for their escape. He was not the wolf. It was a wolf pack that he was chosen to lead.

The same with Hitler. The German people were desperate. They felt that he was their only hope. Fuehrer is a German word meaning leader or guide.

Truly we live in a house of mirrors. When you think that you are seeing other people and events, you are seeing little flashes of yourself, things in your life. You relate everything that you experience to you which is the only way that it can be analyzed. If you react negatively to a person or a situation, you are reacting to something in your own life, not them. If you hate transgenders, there is something in your own life you fear or are hiding. There could be no other reason for violent hate of someone whom you do not know or interact with in anyway. If you get called a name, please remember they are calling themselves a name.

I offer this as proof of the above statement:
Look at someone who spews hatred and prejudice. They complain of others being prejudiced when they are the ones who are prejudiced. Those who complain the most about prejudice are the most prejudiced. Be different, and you see this.

Freud called it the id. This could be interpreted as a dark side of the personalty which needs to be considered. The Salem Witch Craft hysteria was about people projecting their dark side rather than integrating it.

I am Alice’s scribe. Since I am the one writing this, these stories will be told by a transgender woman. This is a woman who was born with horrible birth defects. Damn it! Then you spend your life trying to overcome them like a deformed arm. And this is definitively deformed. This writing also attempts to open this world to a more public view. What our emotions are, what our feelings and thoughts are, as well as what the average life style is of a transgender is and how they approach issues in daily life. Beautiful flowers are often ignored or even considered weeds until someone takes the time to study them.

It has been reported that Michelangelo da Caravaggio’s mother once asked him. “Tell me, Michelangelo, how do you paint the beautiful pictures?” He replied:

All together now, Let the adventure begin!

THE UNIVERSE IS MADE OF STORIES, NOT ATOMS,
IMAGINATION RULES THE WORLD.
IN MANY WAYS