Lisa Gene Cox – It is all about the adventure!

I don’t write fiction adventure, I live adventure and record what it is like.

My mission concerns women’s civil rights, and their social rights, which is their proper respect from males. Women of all flavors, including transgender women, which I proudly am.

I was in the US Navy from 1979 to 1984, and lived in Asia for over three years without ever coming back to the United States. My first job in the Navy was Fire Control Ballistic Technician. I was stationed on the SSBN Patrick Henry stationed in Pearl Harbor. We are the ones who maintain the fire control systems for ballistic missiles on submarines, which are the computers and related equipment that ensures hopefully this missile, which can travel one fourth of the way around the world and release a nuclear bomb, gets close to what it is supposed to obliterate. Can’t believe that I would ever do that. Never even considered what I would do if told to do so. I was shoved that way because of their assessment of me.

During Submarine School, we are taught about being under water and about compression and decompression. This is because the dives don’t always equal the surfaces, most unfortunately. To pass Submarine School, we have to free ascend from a depth of 150 feet. This is to show us that if a submarine is only a couple of hundred feet down, you can make it to the surface. During this training, both of my ear drums were ruptured. This nearly kicked me out of the Navy, and did kick me out of the submarine force.

The US Navy submarine slogan of ‘bubble heads’. “We go up and we go down, we don’t even fuck around. HaHuuugha, Haguugha, dive, dive, dive!” This always brought out those little puffy squinced up lip smiles from my girlfriends.

My next job was maintaining computers, radars, and radios on the aircraft carrier USS Midway. SPN-42 landing system. If the pilot could not see to land on the carrier because of weather, he gave us the controls and my radars and computers landed it. I am sure that something messy was happening up there, maybe for the last time. This was the same aircraft carrier in the battle of Midway Island, in ’42 I think.

A favorite experience of mine was driving this thing. One night, I relieved the helm to take her for a spin. You could do that then if nothing was going on. But you have to learn how to do it first, duh! It was a perfectly calm night, and the water was totally calm. On radar screens on my left and right I could see Vietnam. In front of me was 500 feet of aircraft carrier with about 40 fighter jets tied to the deck. Below me was a 60,000 ton aircraft carrier, 5,000 men sleeping or working, and enough ordinance to blow Asia off of the map.

The big problem is if the captain says, “Pull over, I need a beer”, finding a parking spot is a bitch.

So here I am with my hands on this huge wooden wheel. In front of this wheel is a very large compass like it came from the Wizard of Oz. You are told what heading to take, and you steer this monster where you are told to take it.

The USS Midway was stationed in Yokosuka Japan at that time. I learned to speak, read, and write Japanese. Karaoke was big in Japan. Girl’s hustle was going to Japanese bars and singing Japanese karaoke. The Japanese loved it. Never had to buy my own drinks.

When the ship visited Hiroshima. My pass time was going to Japanese bars and buy old Japanese men sake to tell me stories of the “Day of the Bright Light”, in Japanese. This was in the early 80’s, forty years after the event. Something like that was still fresh in the minds of their old people, especially to residents of Hiroshima. They were very illuminating, just like the day.

Not surprisingly, their version of Pearl Harbor was very different than our version of Pearl Harbor. They told me that America was blocking their oil shipments to certain countries, I cant remember which, and that it was affecting their economy. They couldn’t get us to stop which led to Pearl Harbor. If some country was blocking American commercial shipping and it was affecting our economy, what do you think that we would do?

President Franklin Roosevelt wanted to get America out of the Depression more than anything else. He felt that taking us to war might do it. My father, who lived at the time of the bombing of Pearl Harbor, told me several times that it was thought by many Americans at that time that the attack on Pearl Harbor by the Japanese was known. They allowed it to occur to give us a good excuse to go to war. So who killed those sailors on those ships at Pearl Harbor?

Robert McNamara and LBJ’s lying about what was going on in Vietnam was a factor leading to the social rebellion of the 60’s.

Always go LISTEN to what the other side has to say before passing judgement. Never judge a girl until you have walked a mile in her heels! (ouch).

Then there is ALWAYS “The Rest of the Story,” as Paul Harvey would say. When living in the Philippines, I would go to tuba parlors and listen to the stories of the old men there. Tuba is a natural alcoholic product of a coconut tree. Tubors would grow out the top of coconut trees. The tubor would grow and finally break open, revealing clusters of baby coconuts, which would then go on to mature. Mananguettes, one of the largest occupations in the provinces, or rural Philippines, would climb their coconut trees every morning and every evening to care for their trees. The tubor had to be slowly pulled down with a rope so that it sloped downward. Afterwards they would slice a thin sliver off of the end every morning and night. Then a cup was tied beneath the end to capture the juice. In the evenings they would gather this juice for drinking and selling to tuba parlors. I learned to do this and climbed my tree twice a day.

I still remember the song they sang as they went about their work, sang in Cebuano, a native dialect spoken by people from Cebu, the second largest city in the Philippines:

Translation:
I am a mannanguette (tuba harvester)
morning evening climb the tall coconut tree
thick as the bottom of your food (kublan a form of kobal) is my ass (sampoat)
because sitting on the top of the coconut tree.

Anyway, they told tales of Japanese soldiers walking down trails telling young girls to lay down and take their panties off. Worse Japanese soldiers would enter their huts, pull out their sabers, stick it through a baby, then hold it up in the air and laugh at it.

See if you can find any balance in the above two stories.

I totally loved driving this thing. I am driving something that could take out countries. “Ok, mother fucker, fuck with me now!”

On the wheel were claw marks. I could see and feel the ghosts who had once stood in human life where I was standing and watch Japanese Zeros coming at them though the windows, sweating that they would not crash into the room they were standing in.

So on my drivers record, I have car, truck, motor cycle, submarine, and aircraft carrier.

After repairing two way radios for Motorola. Businesses, fire departments, ambulances, and police vehicles for a year, I worked as an embedded systems assembly language programmer for Pacific Telephone.

Somewhere chronologically before that time, I completed a degree in Computer Science at Tarrant County College, with a lot of business and accounting. I worked as a computer programmer and book keeper. I decided that this was not my calling. Computers don’t hug you or kiss you. They only piss you off.

I then attempted to furthered my education at the University of Texas at Austin in Accounting and Computer Science. But girl switched gears. I loved the UT Austin campus. It is soooo beautiful. However, grad students taught most classes at my level and I was never pleased with that. They were learning at our expense. Go get your experience elsewhere. That is why I go to a community college if I can.

I was taught computer science on an IBM 360 mainframe at Tarrant County College. Pre PC days. It was the only the campus had. When we fucked up, the whole campus was mad at us. “You broke ‘The’ computer, damn you. How am I going to look up student records?” “Me? computer science student? You’ve got me confused!”

I worked at two law offices in Belton Texas for three years developing law office software (There wasn’t any such thing then). And did their bookkeeping since I had been taught how to do it. I learned how to blow off a lot of bull shit. A good skill to have. I had to move to Belton to work for the first one because I had just been honored with DWI #3. He got me 4 weekends of social service, which is unheard of. Usually 10 years. He must have wanted me. Actually it was his wife who wanted me (shh).

I currently own a Food Safety training company, Texas Best Food Services Training. I have a Texas DSHS Food Program licence which is required to do this.

When I wrote the novel If You’re Scared of Me Now, Wait Till I’m Dead , I lived the life of Ann, a strong and vengeful woman. I had to see what it was like to record the details. 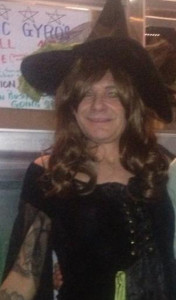 My friends, family, and acquaintances are amazed and embarrassed by the adventures that I live, but what is that to me? It is my life, and I am going to live life to the fullest, until the wheels fall off. Go Girl Power!

3 Responses to About the Author

Leave a Reply to Cancel reply