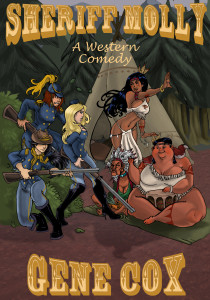 The town of Gunbarrel has problems.

Virginia Steel, head of Lone Star Cattle Rustler’s Association, and her gang, Steel’s Steer Stealers, are constantly out maneuvered by Sheriff Molly, who is dedicated to clear the West of such outlaws, who were recently declared terrorists by the government.

Detachment A of the US Cavalry is having problems ridding the world of Indian evils on the recently declared property of the United States Government land. The Indians thought that it was theirs. They had always been there.

The town drunks just want to live in peace, like all others. Why does someone always interfere?

How these group struggles develop and end it the story of Sheriff Molly.

Meet Sheriff Molly, a woman dedicated to keeping the law in Gunbarrel. Faster at the draw and as dedicated as John Wayne, she is constantly in pursuit of Virginia Steel, Texas’ most notorious cattle rustler. Virginia is head of the Lone Star Cattle Rustlers Association. Virginia’s gang, Steel’s Steer Stealers, devise one plan after another to rustle cattle from Texas largest ranch, owned by Ma Barker. Ms. Barker and her daughters, with the help of Sheriff Molly and her deputy, Holy Hell Holly, persistently pit their wits against Virginia Steel.

Meet the Indians, Squatting Elephant, Dancing Deer, and their mother, Chief Sitting Cow, who only want to live in peace. They manage to make ends meet by selling spirit weed to the cavalry. Their problem is Captain Godsby, head of Detachment A. Along with Sergeant Bell and Private Honnicut, Captain Godsby’s assignment is to rid the world of Indian evils. However, the Indians do not agree that it is the white woman’s land. The battle for territory is personalized by the competition between Sergeant Bell and Dancing Deer. Sergeant Bell wants to be a model and knows she has the body and looks. Dancing deer thinks she is the most beautiful and considers herself woman of the year, hence the competition.

Meet the twins, the town drunks. Jamie and Heather are orphans who live by loading wagons in front of Gunbarrel’s store. Their only thought is a bottle. The citizens of Gunbarell, having both disgust and compassion for the orphans, encourage them to clean up their lives. Jamie and Heather are a problem for Sheriff Molly since the owner of Lucky Cowgirl Saloon complains about their panhandling in front of the saloon. Deputy Holly loves the girls. They are her only real friends, and she helps them get booze. Once the girls get something to drink, they look in the window of the saloon at the two bar guys, dreaming of one day being able to be one of the cowgirls inside.

Molly is married, but is not a dutiful wife. Her husband gets fed up with her being married to her job and tells her that it is either him or her job. She realizes that she has a near perfect husband, quits her job, and they move to a ranch to start a new life together.

Jamie and Heather get tired of being broke, looked down upon, and getting into trouble. Sheriff Molly helps them to get a job on Ma Barker’s ranch and they give this new life a shot.

Virginia Steel tires of the illegal life she lives and runs for the sheriff position recently vacated by Molly.

Deciding she has to follow her dreams and be a model, Sergeant Bell runs off to Kansas City. Her mother is devastated since she had tried so hard to get her daughter this job which helped support the family.

The women find that they must follow their own path, not paths of others, even though there are pressures to do so. After seeing that the pressured changes do not work, they and everyone else are now content and happier than ever when they return to their former ways of life.

A US Cavalry canoe is chasing a canoe of Indians down a river:

“Beat faster”, the chief tells her daughter. Squatting Elephant, seated in the center of the canoe doubles her drum beat and the braves double their rowing.  They pick up speed but the Cavalry is still gaining on them.

“Dancing Deer do something!” The chief commands her other daughter.  Dancing Deer stood up on the bow.  She undulated, making a figure eight with her perfect rear which she points at the braves, stared provocatively, then put the rest of her curves in motion.  Chief Sitting Cow, who was standing in the back of the canoe, arms crossed, full headdress flowing back in the wind, nearly fell out of the canoe as it picked up speed.

A group of cowgirls are drinking coffee at a camp on the bank of the river and see this canoe go by.  They have to move back to keep from getting wet by the wake from the canoe.

“Don’t see that everyday”, one says.

“March,” Molly ordered and shoved Virginia ahead.  Virginia nearly falls over a table.

“I’m not going to your jail, sheriff.  They tell me you torture cowgirls, which is against international and federal laws.  Not me, sheriff.  I’m not the one.”

“Yah you, Virginia, You’re the one. We can now consider you terrorists.”

“I did, take her in deputy. You girls get back to your drinkin’ and gambling.”

One Response to Sheriff Molly